Learning in the Metaverse: The Future of Workforce Development 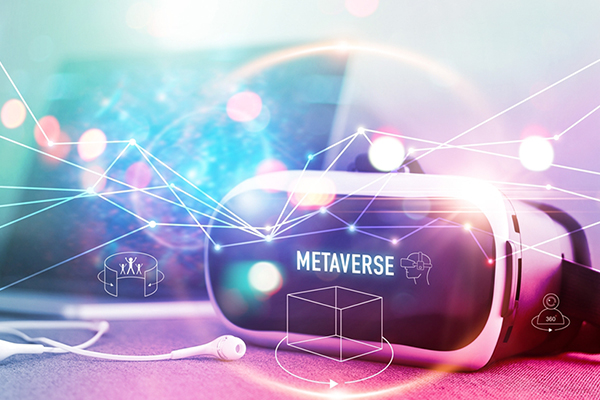 In July 2021, Mark Zuckerberg talked about his long-term vision for Facebook, which was rebranded as Meta a few months later. As he discussed the upcoming evolution of the social media giant, Zuckerberg introduced the world to the metaverse. Coined by US author Neal Stephenson in the 1992 sci-fi novel Snow Crash, Zuckerberg’s use of the term “metaverse” made it one of the most searched terms on Google in 2021.

So, what is the metaverse? The metaverse is a highly evolved, futuristic version of the internet that will consist of virtual, three-dimensional networks. These networks will let users create and interact with virtual environments in real-time and participate in seamless immersive experiences. Apart from Meta, other corporate giants like Microsoft, Epic Games, and Disney also intend to create their own metaverses. According to the Technology Vision 2022 Global Business and IT Executive Survey, about 71% global executives are of the opinion that the Metaverse will lead to positive outcomes for their organizations. Around 42% of them think that it will be a game-changing transformation. As companies gravitate toward the metaverse, they will need to invest more in research and technology to keep themselves updated. In fact, it would also be wise to deploy trainings that help their employees get familiar with the inevitable metaverse.

While the metaverse is a futuristic idea that is yet to fully materialize, it holds great promise for the education and training sectors. The metaverse has the potential to make engaging, immersive, and personalized online learning experiences available to learners around the world. These experiences range from virtual onboarding tours to virtual scenario-based trainings that require collaboration. The COVID pandemic further triggered the need for such experiences, and the trend will continue.

The learning technology for which the metaverse will likely be most suited is extended reality (XR). XR encompasses three types of immersive platforms: augmented reality (AR), virtual reality (VR), and mixed reality (MR). Each of these technologies strive to merge our physical and virtual environments to facilitate ease of learning, though they take different positions on the virtual spectrum or scale. This scale determines the extent to which the learning technology leans toward “virtuality.”

AR experiences allow users to see virtual elements overlaid on their physical environment. Such elements include 3D objects and text that appear superimposed on the physical area over which the AR device is held.

For instance, healthcare professionals can hold a smartphone over a medical device and interact with the virtual text and 3D graphics overlaid on it to learn about its functions. Similarly, car manufacturers can use AR experiences to educate their salespeople and potential customers about the features of a new car model.

AR platforms allow learners to interact with the virtual 3D models to some extent. They can use the screen of the device to rotate the 3D models, increase and decrease the size, engage in activities, and watch preloaded animations, among other interactions. However, the overall level of immersion is relatively low, so AR lies on the lowest end of the virtual spectrum.

MR comes in the form of transparent head-mounted displays (HMDs)—such as Microsoft HoloLens—which combine the user’s physical environment with a virtual space. Unlike the case of AR, which is typically not handsfree, MR users can continue learning or working on a physical object while accessing the virtual information superimposed on the object.

For instance, in the aircraft and automobile industries, a hands-free, MR-enabled headset can allow employees to learn and practice complex operating or repair processes with the superimposed virtual information guiding them through the steps. Not only can this bring down the overall error and accident rate, it can also enhance safety at the organizational level.

Since MR users can access a virtual space within their physical environment and interact with the virtual elements in their physical environment using their hands in real time, this technology provides a higher level of interactivity and immersion. MR lies somewhere in the center of the virtual spectrum—it has some immersive characteristics of AR as well as VR experiences.

VR takes things to the next level with advanced HMDs—such as Oculus Rift and HTC Vive—that allow learners to fully immerse themselves in a virtual environment. In this virtual space, learners are able to experience and practice new skills in an extremely no-stress, safe environment. Learners can make mistakes and learn from them without worrying about the risks and consequences that they would have to face if they made these errors in traditional, real-world scenarios.

For example, technicians can learn how to assemble different parts of an automobile, such as doors and brakes, with no safety implications on the end product. Similarly, healthcare professionals can use VR to practice complex surgical procedures in a virtual operating theater without putting anyone at risk. As another high-pressure example, first responders—such as firefighters—can use VR technology to practice carrying out specific steps in a virtual fire emergency scenario.

Given the high level of immersive experiences that VR offers, it finds itself on the uppermost end of the virtual spectrum. However, prolonged exposure to a highly immersive virtual environment made accessible with HMDs can be a little overwhelming and disorienting. The cognitive overload of multiple audio-visual stimuli can also lead to poor knowledge retention. Therefore, extremely long VR solutions may not be highly conducive to learning. Short VR solutions, on the other hand, make a learning experience extremely engaging, interactive, and impactful.

L&D teams around the globe are gearing up with everything they have in their XR arsenals to make the most of what the metaverse will have to offer.

To find out more about how KnowledgeWorks Global Learning can create engaging AR, VR, and MR solutions for training your workforce, please contact: Kelly.Lake@kwglobal.com